Download and Install iOSEmus Emulator on iOS 13 – No Jailbreak

The Apple App Store has tonnes of games to choose from, but not all the games that you can play on the iPhone and iPad are available on the App Store. Some good games are not part of the App Store due to one or another reason. The only way to play non-App Store games on iPhone and iPad is to jailbreak your iOS device.

However, most of the users don’t want to jailbreak fearing the warranty issues and other complications that may come with jailbroken devices. In such a case, there are alternative apps that allow you to play some great games without having to jailbreak the iPhone and iPad. If you are one of those people, the iOSEmus is an alternative app store with an exclusive app and game offers.

In case you are interested in jailbreaking the iOS devices, read the pros and cons of Jailbreaking iPhone and iPad.

iOSEmus is an internet-based program that allows the iOS users to install emulators like NDS4IOS, GBA4iOS, PPSSPP, DownloadCloud, PlayBox HD, vShare and more without jailbreak.

PlayBox HD, in particular, is an exciting app that you can download from iOSEmus. The app allows you to watch free movies online along with the latest TV show, anime series, etc. It also comes with a download feature for downloading and offline watching of movies and TV shows.

Other apps like NDS4iOS, GBA4iOS are emulators that allow you to play old retro Nintendo games on your iPhone and iPad.

Also read: Download and Install AppiShare on iOS 13 Without Jailbreak

Install iOSEmus App on iOS for iPad and iPhone

You can install iOSEmus without jailbreaking the iOS device following this method. You don’t even need to use tools like Cydia Impactor that requires PC. All you need is an internet connection and a working iPhone with a fully charged battery. Make sure you follow all steps carefully. 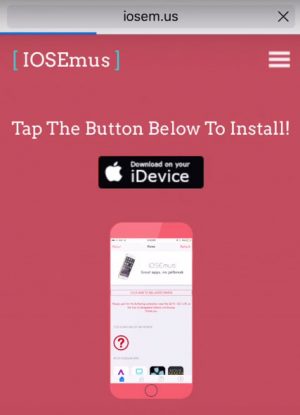 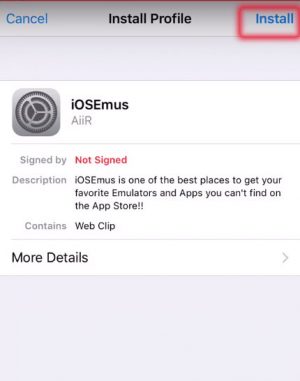 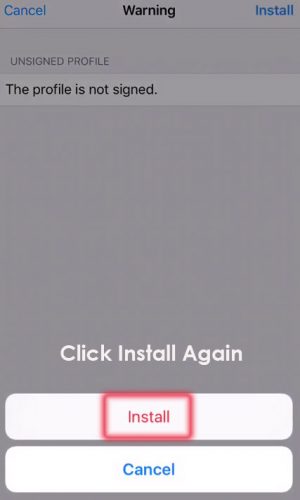 Open the Safari browser on your iPhone or iPad.

In the address bar type iosem.us. It is an official iOSEmus website.
On the website, there are a couple of options to download iOSEmus. Tap on the first option.

A pop-up will appear with a warning. Tap on Allow to proceed.

It would open the Settings and ask you to install iOSEmus. Tap on Install to proceed.

In the next window, tap on Install and Install again.

Finish the installation by tapping on Done.

Note: In case you get an Untrusted developer error while launching the iOSEmus app the do the following.

Go to Settings > General > Profile & and device management. Look for the iOSEmus certificate. Tap on Trust iOSEmus profile to make the app trusted.

After that go back to the home screen and open the app again.

Own an iPhone? Own a Car with CarPlay support? Read our guide on Best Apple CarPlay Compatible Apps You Should Know.

That’s it! Now you can launch the iOSEmus from the home screen. iOSEmus is a must-have app for any iPhone user who wants to play Nintendo DS and GameBoy games on their devices. Apps like PlayBox HD allow you to watch movies for free on the go.